Let's just be honest right up front.  We all get gifts that we wish we hadn't.  I sincerely believe that everyone who gives a gift believes they have chosen well.  Before we get into my take on unwanted gifts I think we need to look into the psyche of those who bought you that weird thing.  Gifters I believe fall into four distinct categories.


Group #1 The Whatevers~ This group has two sub-groups
The Whatever shoppers are usually last minute shoppers as well.  As opposed to years gone by they do have an advantage with the overwhelming acceptance of giving gift cards so at times it can appear they are a thoughtful shopper.  The Whatevers have their list of recipients, enter a box store, find the pre-boxed and sometimes pre-wrapped gift section and start loading their cart.  They truly want to be certain to have a gift for all under the tree and in most cases (see sub-group 1) are giving from the heart.  It is just that shopping isn't their thing and like pulling off a band-aid they simply want to get it done.

Group #2 The I know them better than they know them selves aka EGO-Buyers (EBs)
The EBs are a unique group of people.  They truly believe that despite lists or hints received they know what their recipient really wants. EBs tend to latch onto a perceived collection that even their recipient doesn't know they have.  They're the people that noticed you had one CD by a certain artist and forever more continue to buy you their CDs.  We've had recent experience with one of these when it came to gifts for my 3 teenagers.  Most parents of teens will tell you that the best thing you can give them is a gift card. Considering the price tag attached to the actual things teens want and the ease in which you can buy the wrong shirt at the right store Gift Cards are a safe bet. Well their aunt, who lives over 14 hours away, hasn't seen them in years and with no teens of her own, not only insisted on buying them gifts but allowed her daughter, 6 years younger than my kids, pick them out.  This usually resulted in my opening her presents, returning them to the stores where they were purchased (she was very good at always including receipts) and either buying them something appropriate or replacing them with gift cards.  There were a couple of years I used the store credit for gifts we were giving others and spent the same amount on something my kids asked for.  To my credit not only didn't I say anything for years but I also opened her wrapped gifts so carefully that I was able to reuse her paper for the new gifts so neither she or the kids knew anything.  Regardless of the results EBers tend to be generous givers because they want to make you happy which is important to acknowledge.

Group #3 The Must Have a List Buyers or Help Needed
It is important to acknowledge that not everyone has a knack for shopping.  Let's face it most men hate absolutely hate it and if left onto their own devices turn into Whatever shoppers and then no one is happy.  One of the greatest thing that has ever happened for these type of shoppers was the ability to take pictures with their phones.  I know this because hubby is one of these.  If I happen to comment on something that I like he whips out his cell phone and takes not only a picture of the item but the price tag as well, and if the price tag doesn't have the store name on it he'll take a picture of that too.  Another great tool are all the online wish lists you can create.  I even took this to another level: got the Pandora Catalog and circled the charms I want and even crossed out the one I don't.  It is very easy to confuse these shoppers so do not overwhelm them with too many choices.  If an item comes in various colors be specific about which shade of blue you want.  These gifters really want to please their recipient they just hate the process.

Group #4 The  Obsessive Compulsive Gifter (OCG)
The OCGs are those people whose gifts are usually the big hits at the parties.  Not because of the size or price tag but rather they have the knack of getting just the right gift.  They're the people who actually never stop shopping whether it is for the holidays or birthdays.  When they give a gift very often it is a surprise yet perfect.  They're the ones who spend time perusing catalogs to get ideas.  They tend to not shop at the box stores rather the off-beat, one of a kind stores.  Each gift is given deep thought before being purchased.  They're the ones who remembered your commenting on something once when shopping months ago then returned to the store and got it.  For OCGs it is equivalent to treasure hunting when they discover the right gift.

Regardless of what kind of shopper presented you with a gift I truly believe that the ultimate goal is for you to enjoy it.  My entire attitude with gift giving is once it is out of my hand and into yours you can do with it as you please.  I want you to be happy.  So if that means you're standing in line returning it for something better ~ GO FOR IT , that's why I include the receipt whenever possible. I also think anyone who includes a receipt or has simply left store tags (usually with the price removed) is telling you the same thing.  Not returnable?  Well I am all about the re-gifting and have not only done it many times but have also received many.  FYI  just remember to remove any old wrapping or cards before you give it to me or pass my gift onto to someone else.  There is one big exception to all of this.....THE CHRISTMAS SWEATER.
For years well meaning Aunties and Grandmothers everywhere spend hours upon hours knitting, crocheting and decorating sweaters as gifts for their families.  There are many a dis-heartened "Wow, thank you so much" heard when one of these sweaters are received.  FEAR NOT!! Without realizing it your Granny has just handed you a treasure.  A few years ago Youth-Groups started hosting "Tacky Christmas Sweater" Parties.  Shortly after Thanksgiving re-shop stores like Goodwill and Salvation Army are being besieged by teen and college aged customers looking for tacky Christmas sweaters.  This craze is no longer confined to the young crowd as I've seen a number of Christmas Lunches where all the guests are wearing sweaters you know they'd never wear anywhere else nor would you see a group of women dressed so loudly on purpose.  Don't believe me then do a search on Pinterest where not only can you see tacky/ugly sweaters but party ideas as well.
So with all of this being said. I hope you received gifts that you're happy with. If not remember this chances are you'll be invited to a White Elephant Christmas Party next year where you can dump one or more of those unwanted presents. 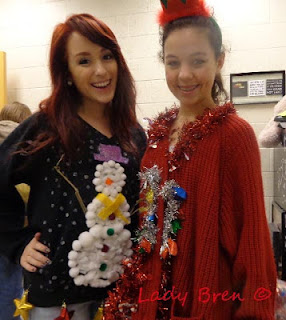 These girls were two of the top three winners at their choir party~ yup proud parenting moment!