There's no room at the Library

Can you believe it?  I couldn't find a parking spot today at the Library!  I felt a bit like a stalker driving around until I saw someone walking to their car then snagging the spot.  As if that wasn't enough when I walked up to the doors I saw there was actually a line going around the building?  A sense of pride washed over me as I realized these people were standing in line on a chilly Tuesday afternoon so they could vote early!!
With the election just one week away I am not going to jump on the political bandwagons out there.  There are enough people spewing sharing their views one way or another and my voice, as glorious as it is, isn't needed.  All I want to do is encourage you to vote.
I remember when parents headed to the local school all hours of election day; which is probably why we had off that day, to vote.  I first heard of absentee ballots while I was in college.  The reality was in the 80's there wasn't a real push to engage college aged voters and getting absentee ballots weren't all that easy so I missed the 1984 presidential election. Since 1988 I'm proud to say I've never missed a presidential election and very rarely have I missed any opportunity to vote.
This will be the first presidential election that my two oldest children will be able to vote in.  I love how engaged they both are seeking out answers to their questions and discovering which candidate is best for them.One will be voting by mail from Alabama and the other wants to wait until election day to vote.
Here in Florida I can't imagine the Supervisor of Elections making the process any easier (note me swiftly side-stepping all the voter id issues). We have 7 days, including a Sunday, to vote early.  You can vote anywhere in your county, at which site is most convenient for you.  Don't think you can make it to the poll? You can request an absentee ballot up until 5pm on October 31st~ no questions asked.  As far as I am concerned nobody has an excuse for not voting in the Sunshine State.
What does amaze me is that not every state offers early voting.  According to the National Conference of State Legislators (check out their cool map) 32 states and the District of Columbia offer early voting.  Two states, Washington and Oregon do all of their voting my mail (learned something new today). As far as absentee voting goes 27 states and DC will mail a registered voter one no questions asked while the remaining 21 require a qualified excuse.  Finally 7 states offer permanent absentee voting for their residents who meet qualifications.
So whether you consider yourself Conservative, Liberal, Republican, Democrat or simply confused like me please be sure to cast your vote in this presidential election.  'Cause like my Dad used to say:

If you don't vote you can't gripe

By Lady Bren No comments: Links to this post

What more do you need? 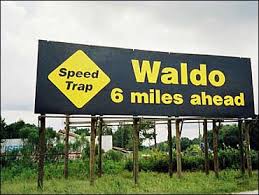 I really do not understand drivers today.  Not too long ago I shared my bewilderment over the clueless folks I see on a weekly basis getting pulled over in school zones.  Today I have to add that well simply put some people are just plain STUPID.
Honestly that has to be the reason because what more do you need than the sign above to make you obey the speed limit?   I can't even cut any slack because 3.5 miles later there's another sign warning you: 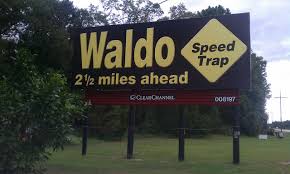 I have yet to pass though Waldo without seeing some idiot receiving a ticket!  The city of Waldo (it is so tiny calling it a city seems much) ranks as Florida's Worst Speed Trap according to National Motorists Association.  Personally when driving through this town I go 5 mph below the speed limit, I do not change lanes unless I have to and if I do my signal is on before crossing lanes.
This got me thinking though ~shouldn't we be driving this vigilantly all the time?  I'm not saying we should drive in fear of getting pulled over for the slightest infraction.  However shouldn't we be as cautious as possible at all times?  In no way shape or form can I say that I always obey the speed limit.  I'm a stay in the flow of traffic kind of gal.  I'll admit to having received a speeding ticket while driving through Emporia, Virginia years ago which I deserved but not at the rate the officer wrote, the worst part is I knew that was a speed trap area but it was late at night and well getting to NY for an emergency was heavy on my mind.
I strongly believe that texting and driving should be illegal.  Not so sure where I stand on the cell phone issue if using a hands-free set.  Currently neither is illegal in the state of Florida despite multiple attempts to pass a bill. For some reason these bills continue to die after being read in the Transportation and Safety Subcommittee but then all are referred to the Economics Committee (gotta love politics)

So readers please please please I beg of you.  Should you have to travel on FL301 through the town of Waldo please heed their speed limit signs. You really don't want their favorite souvenir.

By Lady Bren No comments: Links to this post

Email ThisBlogThis!Share to TwitterShare to FacebookShare to Pinterest
Labels: driving

Think I have finally settled on a name for this weekly post that I like ~ hope you do too!

I am very excited to share that I have crossed a threshold on my weight loss journey.  As of yesterday's weigh in I am down:

Cocoa a cow from Stonyfields Organic Farm weigh 30lbs when she was born.

I didn't discover any new glorious food to share with you this week. However last I did try a new breakfast recipe that was a huge hit.  I, of course, tweaked it a bit and think you'll really enjoy it:
Italian Pepper and Egg Sandwiches
Original version 5 PP+ Updated 7PP+


By Lady Bren No comments: Links to this post