Lady and The Brain ~ The Beginning Part II

Wait 6 months!  As if we would actually take this piece of medical advice.
Not sure what I'm talking about then hop over here and read Part I

Picking up where I left off ~  We went from expecting The Brain to have surgery in the next 48 hours to driving home exhausted, completely over-whelmed and unsure what to do.
Following discharge protocol we made an appointment for our primary care and neurologist.  Both recommended getting a second opinion with The Leyerle Group.  They're at Downtown Baptist (Remember my Rant from Part I~ this is the hospital we should have originally transferred to.  Can you imagine the frustration!!!)  Usually there's a 4-6 week wait for appointments but thanks to a cancellation they were able to see us the the following Tuesday, January 16th.
Dr Hanel is the polar opposite of the previous Neurosurgeon.  The first thing he does is show us side by side the MRIs from 2016 and the new one.  There is a growth in the thalamus. He completely disagrees with the advice of waiting six months.  He recommends a biopsy BUT cautions that due to the location this is a high risk surgery.  The procedure is officially called a Brain Lab guided Needle Biopsy. One of the things we liked most about Dr Hanel was his approach to complete patient care.  He made sure that we understood his role as the team's quarterback and our's as the coaches making the decision.  (Reminder: at the time all of Jacksonville was in a football frenzy as our Jaguars had just won the Wild Card game)  We decide to schedule the surgery for Friday  January 26th, thinking The Brain can return to work on Monday~ WRONG.  Somehow we completely missed that there's a week recovery.  Again had we gone to Downtown Baptist we would have had this all done within days! ugghh
Thankfully the surgery went well and The Brain only had to stay overnight.  Now the waiting for the results begins.  We have an appointment scheduled to meet with a Neuro-oncology Team but this gets postponed as the biopsy has been sent to MD Anderson in Houston for further review.  Finally on February 16th we meet Dr. Cavalieri and his partner Dr Olson, a Radiation Oncologist.  In the office is a NY Yankees cap so we know we're in good hands. The Brain has a Grade 2 Astrocytoma that is behaving as a Grade 3 in the Thalamus.  This specific type of tumor is least common (<5%) and is usually found in children or young adults.  The recommended treatment is 6 weeks of radiation and chemo-therapy followed by monthly chemo-therapy.  The team took over an hour with us making sure we understood the diagnosis, treatment and process. They explained that the biopsy was sent to Houston for further protein markers which would enable them to more precisely write the radiation therapy.  While the size is a Grade 2 there a few protein markers that presenting as a Grade 3 so they are taking a more aggressive approach. We left with a notebook of resources and our minds racing.

I'm going to stop here and explain a few things.

Tumor Stages Vs Tumor Grades
Staging refers to the extent or spread of cancer and as Brain tumors don't spread a Grading Scale of 1- 4 is used.   Brain tumors are graded by how the tumor cells look under a microscope and how they grow:
Slow growing tumors (Grade 1&2) can over time become a higher grade tumor.


Where and What is the Thalamus? 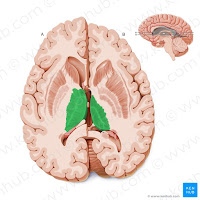 From News-Medical.Net: The thalamus is a small structure(highlighted green) within the brain located just above the brain stem between the cerebral cortex and the midbrain and has extensive nerve connections to both.  The main function of the thalamus is to relay motor and sensory signals to the cerebral cortex. It also regulates sleep, alertness and wakefulness.
Because of the tumor's location removal is not an option.


What is an Astrocytoma?
Astrocytomas are tumors that grow from a type of cell in the brain called an astrocyte. Throughout the brain and spinal cord we all have nerve cells called ‘neurons’, which transmit messages (electrical and chemical signals) to, from and within the brain. Surrounding the neurons are cells called ‘glial cells’, that support and protect the neurons by providing them with oxygen and nutrients and removing dead cells. An astrocyte is a type of glial cell.  Astrocytes are the most abundant cells in the brain, and as well as supporting and protecting neurons, they also help to pass messages between the neurons and, therefore, are vital in processing information in the brain. (From The Brain Tumour Charity UK)

Still here? Kudos to you for reading all this info.
Next post: The InBetween (sounds like an episode from Stranger Things)


Lady:
Brain, what do ya wanna do tonight?