This Tumor Has Gotten Mean and Nasty

Life changed quite quickly after January.
Our new family slogan is:
Cancer Sucks

It is quite hard to comprehend the rate of decline in The Brain's health after mid-January.  We were at Disney.  He was at work most days. Movies, Bingo and eating out ~ we were enjoying all of our regular activities.  We finished the chemo and had MRI scheduled for February 15th. Then he started falling.

Actually, it wasn't "falls" at first rather simple stumbles.  He "misstepped" at work.  He had trouble getting around equipment at work.   He had difficulty getting over the threshold into the house.  Then things started progressing. He "Tucked and Rolled" at work after tripping over something.  He lost his balance then fell getting out of his recliner.  The doctor increased The Brain's steroids hoping to strengthen his legs.

Late one night he fell in the bathroom and couldn't get himself up.  It took the girls and me over an hour to get him off the ground and back into bed.  His left side was horribly bruised.  He was insistent on returning to work ~ I vetoed that.  A couple days later he returned to work where he once again fell.  February 12th at 2:30am he fell in the bathroom again.  This time it took us even longer to get him up.  I called Dr. Cavaliere and he had us take him to the Emergency Room.

The main idea behind going to the ER wasn't that he had seriously hurt himself it was simply the quickest way get an MRI instead of waiting until the 15th.  Dr. Cavaliere came in early that morning to be there as soon as the results were available.  This post's title is the very first thing he said to me that morning:
This Tumor Has Gotten Mean and Nasty 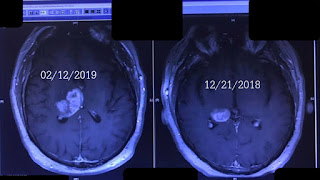 The tumor is now a Grade 4 Multifocal Glioblastoma (GBM)

Broken down this is what that Diagnosis means:

While at the hospital Dr. Cavaliere arranged for us to meet with Physical and Occupational Therapists, Social Workers and a Palliative Care Specialist.

Friday, February 15, we met with Dr. Cavliere to start a new treatment.  At Grade 4 chemotherapy is no longer an option for us so we are going to start an Infusion Therapy of Avastin.  Avastin is an anti-cancer drug that aims to kill a tumor by starving it of the energy source (blood) it needs to grow. Avastin is referred to as an anti-angiogenic drug. Angiogenesis is the process by which tumors are able to create their own blood vessels to feed themselves.   The first treatment is scheduled for Friday and lasts 30 minutes.  Thankfully, Patients typically feel no side-effects from this treatment.

Say it with me:
CANCER SUCKS